LESS people are dying in Ireland this winter than for many years. In fact, since the peek of the Covid19 crisis last March/April 450 less people died than over the same period in 2019, this is a fact.

This month THE PEOPLE’S PAPER have an exclusive report on claimed Covid19 deaths versus actual excess deaths in Ireland throughout 2020, the data is explained below and fully verifiable.

Excess deaths during 2020 – showing less people died over last 8 months, when compared to 2019

Here is further detail on the numbers involved: 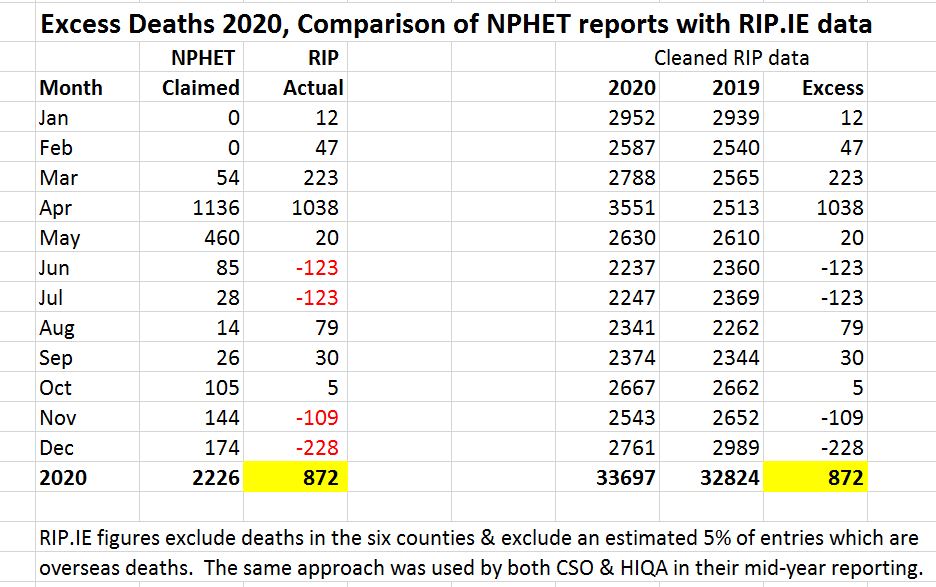 Government knows that LESS are dying, but it gets no mention, why?

Here is an interesting quote from Leo Varadkar, speaking on RTÉ Six One News on 17th December last:

So why are NPHET publishing misleading figures every day, leading us to believe that Covid19 is killing people and that we are all in mortal danger?

It all depends on how you define a Covid19 death, we offer some explanation below, but we also offer this quote from Varadkar early in 2020, explaining how they counted:

“we counted all deaths, in all settings, suspected cases even when no lab test was done, and included people with underlying terminal illnesses who died with Covid but not of it.”

The entire presentation is frightening, doubly so, given that Covid19 does present a real danger to those who are vulnerable.

For normal healthy people, especially the young, below 60 years old, there is almost no danger.

What is all the fear about? Why is our country locked down again?

The World Health Organisation (WHO) already advised against lockdowns, saying they only create poverty.

Maybe the fall off for the last 8 months is explained by the Covid19 induced premature deaths in Care Homes seen during March/April?

Patients were transferred into Homes without Covid19 testing and without PPE, the facilities were understaffed. Of those who died in March/April 62% were in the Care Homes, a result of gross Government neglect, that remains unanswered.

Scandalously, Micheál Martin says that there will be no public inquiry into these tragic, lonely deaths.

Notes regarding our Chart data, and the identification of Covid19 cases and deaths:

We make the general presumption that excess deaths in a pandemic are caused by some infectious disease, in this case by Covid19.

Data for ‘Claimed deaths’ comes directly from NPHET, we mapped the data over months in order to see any trend.

If Covid19 is killing people on it’s own then we should expect these to be in excess of normal mortality.

Our research compares these reported Covid19 deaths with actual excess deaths for 2020.

Our data for actual deaths was taken from the RIP.IE website.

Both the CSO and HIQA have previously used RIP.IE as a source; to verify its accuracy they compared official death figures over the past few years with RIP.IE and find it to be less than 2% off the true figure.

In order to establish the level of excess deaths, a difference of less than 2% has no relevance, provided that it exists in both years under comparison.

The difficulty with official death figures is the delay in reporting; it takes an average of 2 months for a death to be notified, and often longer.

The CSO reports that the Covid19 crisis has delayed the reporting systems even further.

Both the CSO and HIQA published their own excess death reports mid-year in 2020, based on RIP.IE data, therefore we are confident doing the same now for all of 2020.

For the excess death data in ‘Chart 1’ (above) we took the RIP.IE data for 2019 and 2020, about 65,000 records in total (after cleaning), we spread the data over months, and subtracted the totals in one year from the other.

To clean the data we removed duplicate entries and any deaths identified as from either the 6 counties or abroad (many deaths are reported with multi-location).

We have checked our results against earlier official data and are confident that we are accurate; up-to-date official data will not be available for another few months.

The Chart 2 data (below) was copied by us on 31st December, directly from the NPHET website, it is clearly visible that the massive increase in case numbers has no reflection even in the claimed Covid19 death figures.

In regard to official claimed deaths, readers need to consider how the figures are arrived at.

Listening to daily NPHET reports we hear regularly about people dying “of or with” Covid19, this is a very broad statement, non-specific.

In mid-April the WHO issued guidelines on how to identify Covid19 deaths, they include any “death resulting from a clinically compatible illness, in a probable or confirmed COVID-19 case”.

The HSE has stated that where the treating doctor has “a strong clinical suspicion” that the patient had Covid-19 … but where the person has tested negative for the virus, or not been tested at all, these deaths will be notified as a death in a “probable/possible Covid-19 case”.

Cases are normally confirmed, but not always, based on testing.

PCR is the primary test, based on magnifying (cycles) samples to identify viruses. However, PCR accuracy is strongly disputed.

The New York Times reported that in Massachusetts, from 85 to 90 percent of people who tested positive in July with a cycle threshold of 40 would have been deemed negative if the threshold were 30 cycles.

People with absolutely no symptoms, and in no danger at all, are bring diagnosed with Covid19.

The HSE uses a cycle count of 40 to 45, so high results are expected.