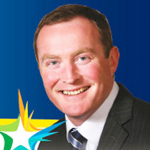 This is the text from a leaflet distributed in the South East Electoral Ward of Cork City, in response to a Public Meeting called by a local Fine Gael Councillor.  A .PDF copy of the leaflet can be downloaded here.

It is a long time since any public representative in the South East Ward of Cork city organised a Public Meeting about anything.  Therefore, on such a rare occasion, we might expect that the event be of particular importance to the community.

It is the constitutional role of local government to provide “a forum for the democratic representation of local communities”, and “promoting by its initiatives the interests of such communities”.  SO, we saw it in action, spear-headed by Cllr. Des Cahill of the private member club/political party called Fine Gael – we were invited to a meeting (17/10).

There are many concerns that might be addressed in public forums, issues affecting our families and our community:

SO, what then does our local representative organise a meeting about?

What else only the burning issue of the day: ‘Dog Fouling Awareness and Cleanup’! … One might ask… “what kind of s*** is this?”

Our city and country are in the middle of unprecedented crisis and Fine Gael wants to increase our awareness of dog fouling! Maybe Cllr. Cahill is exhausted from tackling the other issues facing this community and wants to be funny? Maybe Fine Gael and party politics generally has ‘gone to the dogs, barking mad’ ?

This meeting was a gross insult to the people of Cork’s South East Electoral Ward, it was an insult to the Irish people generally.

Clearly, our public representatives are bankrupt of ideas and their utterances on “cleaning up” are no more than going through the motions of being a ‘concerned’ public representative. Their only concern is to hoodwink the people and maintain their hold on power, where they do very nicely, thank you very much!

There IS an Alternative …

It is the plan of The Peoples Convention (South East Ward) to contest the next local elections, expected in June 2014.

We will organise public conventions to SELECT people’s candidates rather than accept the selection process of the parties, which are no more than private clubs of vested interests.

We will work to ELECT candidates that are selected by the people in open forum and who have committed to acting only on MANDATE from the people.  This means that the community must continuously be consulted on ALL issues of policy and that back-room deals, typical of party politics, will not be possible.

It also means that no party gets to substitute its own policy for that decided by the people, no private club has the right to decide policy on our behalf!

The Peoples Convention will CHECKUP on the performance of public representatives and they will be subject to RECALL if the people decide.

Join us is this endeavour!