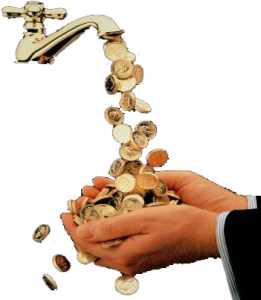 Articles in DISCUSSION are published according to the guidelines of the Editors and do not necessarily reflect the views of CPPC, they are to encourage investigation and discussion on the issues facing us.

This article is a timely contribution, Government is planning installation of water meters throughout the country in the coming months – preparations for the introduction of household water charges.

In July 2010, the United Nations passed a resolution declaring water and sanitation, A HUMAN RIGHT. Hard pressed families can expect to pay €370-670 per year to exercise this right.

The cost to the state of providing water services is 1.2 billion euro. The government intend to recoup 500 million euro by charging. Their line on charges and metering is that, this will make the system more efficient, ensure money for upgrading of dilapidated infrastructure and control public wastage. The reality is rather different. In some areas, up to 58% of water is lost, through leakage, before it even gets to homes.

This money will be used to pay back the gambling debts of bankers and developers.

As a condition of the EU/IMF/ECB bailout deal, we are to pay for water & sanitation services.

The government has set up a new state company, Irish Water, at a cost to us of 80 million euro, to manage the country’s water supply. The responsibility for water and sanitation is to be taken out of the control of the local authorities and handed over to this new company. Irish Water has been made a subsidiary of Bord Gais. This company will have considerable power, they will not need permission to come onto private property, it will be an offence to prevent access or fail to provide information or interfere with equipment, they can put a charge against your home and reduce your water pressure. The government intend sending an information leaflet to every home in the country in the next month.

Another condition of the bail-out is that public companies are to be broken up and sold off.

..”we will resist, come what may, the reintroduction of domestic water charges. Labour believes that everyone has the right to free, clean, safe drinking water.” Ciaran Lynch TD, Apr 2009

IF BORD GÁIS IS FOR SALE…IRISH WATER IS ALSO FOR SALE.

Plans are well under way to meter the country’s water supply. Tenders are to go out in the first 3 months of this year.

Last week Bord Gáis announced the appointment of Dublin city manager, John Tierney to head up “Irish Water”. This is the man who pushed through the privatisation of refuse collection in Dublin, & subsequently, the rest of the country.

Water metering is the start of the privatizing of water and sewage. We have seen what happened with refuse, wavers scrapped, poor service or no service. Eircom, after the dismantling of that company, we now have one of the worst telecommunications infrastructures in Europe.

Private parasitic water companies are setting up in Ireland, in their droves. Huge multi-national companies who wish to make a profit for their share-holders with little or no concern for their customers. We have seen what they have done in England, very little re-investment, poor service and money flowing out of the country to fatten up foreign investors. Sound familiar?????

The IMF/WORLD BANK, with their reckless policies, are responsible for the current crisis. They insist on water privatization wherever they go. THEY KNOW ITS VALUE. Some of the countries where these institutions have tried to privatize water include, Ireland, Bolivia, Argentina, Korea, Nigeria, Chile, Australia and South Africa. By 2025, the number of people living in countries without adequate water supplies is expected to reach 800 million. Industry and people in countries like India and China will face huge water shortages while we live in 1 of the wettest countries in the world.

Our water is set to become one of the most valuable resources on the planet.