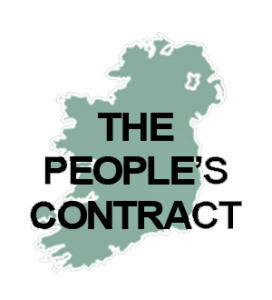 THE PEOPLE’S CONTRACT will be presented to all candidates in the coming elections, regardless of who selected them. It is to assert the primacy of the people and declare our right to decide all matters of state policy – not just once every few years, but continuously, on every issue up for resolution.

Following discussion over an extended period, the contract text was finalised at a meeting in Cork on 20th October 2013, by a number of groups and individuals concerned with finding solutions to the problems in our country.

The intention is that THE PEOPLE’S CONTRACT will provide the basis for a broad movement for democracy and end the rule of vested interests and Political Parties over the people of Ireland.

The People’s Convention (CPPC) fully supports this initiative, which is independent of any organisation, and encourages all democratic minded people and organisations to do likewise.

The future of our country is our responsibility, it requires that we empower ourselves and assert our rights – THE PEOPLE’S CONTRACT provides the basis for this empowerment – let’s embrace it!

Note, there is a separate version of this contract document without these notes from CPPC and with space provided for signing by the candidate nominated and two witnesses.

To Assert our Democratic Rights and Restore our Prosperity through our own Empowerment, We implement the system of Constituency Representation as laid down in Bunreacht na hÉireann

“Ireland is a sovereign, independent, democratic state”, it is the people’s right “to decide all questions of national policy”. We elect people to “represent constituencies”.  There is no right of representation for any Political Party or any individual’s conscience. Our Constitution provides for the “democratic representation of local communities.”

Democratic representation is vital to the happiness and prosperity of the people; those accepting such responsibility require and may expect the fullest support of the people in fulfilling their duty.

As a candidate or elected Constituency representative I declare:

These principles are the people’s “inalienable, indefeasible, and sovereign right”. We affirmed these rights ourselves, through our fundamental law – the Constitution. I undertake to uphold and make them a reality in public life.

I will participate in the work to create the necessary Constituency organisation of all voters – to ensure broad public consultation, making the people’s decisions a binding mandate for all representatives.

My election as a representative does not pre-decide any issue of policy, I undertake to seek a Constituency mandate on each issue after the election.

My right to conscience is not impaired by this undertaking. That right is exercised, as for everyone else, through participation in Constituency discussion and voting. As a representative my conscience requires me, first and foremost, to discharge my solemn undertaking in THE PEOPLE’S CONTRACT to honour the Constituency mandate.

We will rebuild our communities and prosperity through democratic renewal, with the people proposing and deciding policy on all issues – including on questions of business, economy, bank debt, our natural resources, health, social care, education, industry, the environment and international agreements.

As a representative, I will assist the Constituency in supervising public administration, ensuring the implementation of the people’s policy decisions and the provision of services for all, based only on need.

I accept the right of the people to recall (un-elect) any representative who fails in their duty to carry the mandate of the Constituency. If such an exceptional measure is required it will be decided by a binding Constituency plebiscite.

I freely and proudly accept the title of “People’s Candidate” and solemnly undertake to honour this, THE PEOPLE’S CONTRACT, as a matter of conscience and service to the people.