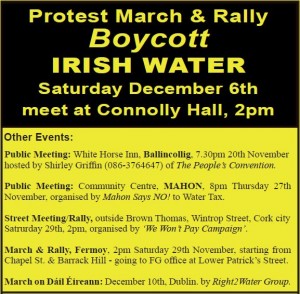 Our rights as a people are denied. We are dictated to, we are threatened in our own homes, our senior citizens are abused, our children’s future thrown away – and for what???

Our entitlement to democracy has been hijacked by groups of vested interests who dictate over us.

We have tax upon tax, cutback on cutback, unemployment and business closures – we have been forced to take on over €70,000,000,000 (70 billion!) in debts that are not ours. Not 1 cent of the IMF/ECB so-called bailout was spent in Ireland – it ALL went to Banks and Bondholders. Our state Pension Reserve has been handed over, our vast resources given away – our entire economy is geared to dependence on foreign ‘investors’ – we are sold-out.

The Water charge is just an excuse for another Tax!

Irish Water Limited are going from scandal to scandal, the bonus culture is alive and well. They have wasted hundreds of millions on NOTHING, no leaks are repaired, no water has been cleaned that wasn’t already being looked after – it is just another Quango.

The fact is… Government has NO right to impose policy on the citizens, but this is what they are doing time after time.

Our Constitution states that it is the right of the people “to decide all questions of national policy…”.

When we elect TD’s we do not give them the right to impose anything, they are elected to “represent constituencies” – our Constitution makes no provision for TD’s to represent any Party, themselves or their personal conscience.

DEMOCRATIC REPRESENTATION is supposed to be of the people, in our Constituencies, not Political Parties or any other vested interests.

In our movement to stop the Water Tax, let’s be sure that we deal with the underlying issue – lack of democracy itself.

Let’s not accept dictate, instead let’s assert our entitlement to democratic representation – that is the key.

If the people were represented, if our preference decided policy in our state, would we have this Water Tax?

Protest March: Meet outside Cork city Library at 2pm on 15th November.  Organised by the Fliuch Off group – title is ‘Keep the (Water) Pressure Up’, the event is on Facebook.

March & Rally, Cork City, Meet outside Connolly Hall at 2pm Saturday 6th December, march to a Rally at Daunts Square – ‘Boycott IRISH WATER! Assert the Rights of the People!“. This event is hosted by CPPC.