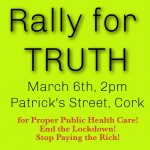 There is a better way to treat Covid19 than lockdown, it needs to focus on the vulnerable and on preventative care in the community.
(article from issue 18 of THE PEOPLE’S PAPER)

We remind people that vitamin D supplements are effective.

Civil Rights are being trampled on, our fundamental human right to meet, work, travel and be the primary judge of our own health care is being denied.

Rights enshrined in Bunreacht na hÉireann, the Constitution, are denied without any vote of the citizens. No Ministerial order, enactment or regulation is allowed to deny a provision of our Constitution.

Because we are against lockdown, and because we say the Government is not telling the truth, does not mean we deny the danger to public health.

By now we must all know of people who died due to Covid19. In many cases people have died alone, lonely deaths, with families unable to comfort loved ones or to grieve properly on their passing.

We also know people who have died in desperation, adding to the growing rate of suicide.

There is a better way to treat Covid19 than what is being forced on us, but debate is non-existent.

The restrictions are damaging.

People have even been denied access to spiritual comforts and religious worship. Bizarrley, in Louth earlier this month fines were issued, and three people arrested, for attending the Shrine of St Bridget, ten Gardaí were involved.

We are aware of people with multiple Cancer complaints whose treatment has been cancelled and rescheduled as ‘telephone appointments’ – absolutely no use to anyone! Yet about 170 people die every week from cancer.

Every night on RTÉ we are presented with doom and gloom, the wolf is knocking on our door, we dare not open it or go out.

The fear mongering is working, people are terrified to go out, and vulnerable people are being neglected – this is wrong!

As we reported earlier, 450 less people died during the last 8 months of 2020 than over the same period of 2019. We do not deny the danger of Covid19 but why has RTÉ not reported or explained this? Instead they blindly repeat the misleading NPHET numbers, claiming that 1,036 died over that period. That is a difference of nearly 1,500.

Of course NPHET explain that their figures include people who died “of or with Covid19”, and their inaccurate PCR testing system can find SARS-CoV-2 almost anywhere, it is reputed to have up to 90% inaccuracy (by New York Times).

We are not being told the whole truth, and it is having very serious impact on our health and economy.

TRUTH is something we expect to hear from people we trust, especially those who have responsibility for our health care and our future.
Can Tony Holohan to be trusted as Chief Medical Officer (CMO)?

Just as we go to print Dr Holohan refused to apologise for how the Cervical Cancer screening was handled. He was asked three times by a reporter who reminded him that, as CMO, it fell under his remit.

He expressed regret for what happened, and expressed sympathy for the victims, but he would not apologise, he waffled around it.

When the scandal first broke Holohan advised Minister Harris to cover it up, to hide the TRUTH, even though women were dying.

“I strongly advise that you do not commit to a review of Cervical Check arising from the recent court case … it could unnecessarily undermine public confidence”, said Holohan.

He was more concerned with public confidence than with health care, women died under his watch, and more will die as result.

Tony O’Brien stepped down as head of the HSE over the scandal, but Holohan carries on as CMO.

How can he be trustworthy with such a record? And how trustworthy is a Government who would keep him as CMO, facing what they call the worse health crisis in 100 years?

The numbers dying this January are significantly up on January 2020, an excess of 926 (1066 claimed by NPHET). We have no breakdown on the cause of these excess deaths, but some will be due to small numbers dying in the preceding months.

Of concern is the dramatic increase in Care Home deaths in January (369), we only hope it is not a repeat of the neglect from last March/April which still has not been investigated, or of probems with the vaccine.