The prospect of much needed political change advanced today with the People for Change (PfC) organisation joining forces with the other People’s Candidates running in the local elections.  Paudie Dineen of PfC signed THE PEOPLE’S CONTRACT today and joins Brian Houlihan running in the Cork South Central Ward. 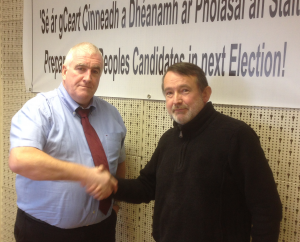 In a statement today Paudie said that this was “a step in the right direction, to bring democracy to the people”.  Paudie said “the movement to have People’s Candidates is the best approach to ending the pact at City Hall and removing the Party ‘whip’ system”  He said that “the Parties have dominated City Hall for too long and it is time for the people to be represented, and not Parties, at all levels of Government, locally and nationally.”  Paudie also stated that THE PEOPLE’S CONTRACT “will allow constituents to have the say with policies in their local areas, towns and cities”.

Diarmaid Ó Cadhla, spokesperson for The People’s Convention, welcomed the decision of PfC to work together, he said “more organisations and individuals should do likewise; the people need an alternative to the Party system.”  Diarmaid said that “this development allows for a real alternative in politics, to end the effective exclusion of the people from our democratic process.”