The Metropole Hotel in Cork was the venue for CPPC’s first public meeting. The attendance of about 40 people came to discuss how the people can empower themselves

Further meetings are being planned for Cork, Dublin, Galway and Carlow early in the New Year.

The meeting was encouraging and was characterised by the quality and level of the discussion that took place and by the fact that approximately half the people attending have signed up to CPPC to be active members and assist in the work. 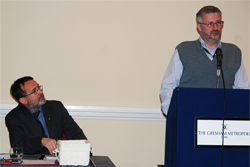 The meeting was opened and chaired by Dublin architect Brendan Doris

Who is behind CPPC?

Opening the meeting Brendan Doris said that people always wanted to know the answer to two questions when new initiatives are proposed – Who is behind this new organisation? And what is the key or big idea behind it?

Brendan explained that the initiative for starting CPPC came from a number of individuals who had been active in the student movement of the late 1970’s and early 1980’s, who had been at the centre of a campaign by the students themselves to take control of their own national union and to defend their interests at that time.

Simply put it was a movement for democracy, which is exactly what we need today.

Some of these former students’ leaders, who are professionals and business people today, remained in contact since those days and many continued to take an active interest the social and cultural affairs of the country. None became involved in so-called mainstream politics, of political parties of self interested careerists, serving the powerful and elite in Irish society. These parties have turned the Dáil into a club of contending political groups with essentially the same policies who play out a game of ‘government’ and ‘opposition’.

Since the start of crisis in 2008, discussions involving many individuals and organisations have helped to formulate the approach which CPPC is now taking to every corner of the country.

The people alone can empower themselves and they need an organisation that they can use to place their own representatives in command of the Dáil. This same organisation will be used to decide upon and mandate their representatives on all the affairs of State and furthermore to recall those who may fail in honouring their duty of service and leadership.

CPPC was announced on 27th November last. CPPC is an organisation of all citizens without distinction. It is a movement for democracy. It doesn’t concern itself with ‘left’ or ‘right’ or indeed with creating a shopping list of policies to trick the people into giving a one-time mandate to some self-selecting group. 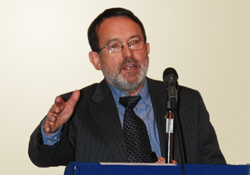 The People can Empower Themselves

Diarmaid Ó Cadhla, spokesperson for CPPC, went on to outline CPPC’s approach to the question of the people empowering themselves, emphasising that it was the democratic right of citizens to be the decision makers in our country.

Faced with the most serious of economic and social problems, renewed mass emigration, uncertainty and actual fear, the people are left with no say in the decisions that affect us all.  Politics and our democratic process and institutions are dominated by parties that represent powerful groups of vested interests which have given away our resources. The citizens are effectively excluded.

The plan of CPPC is that citizens should contest the forthcoming general election with their own candidates, selected in public constituency conventions.

The Peoples Conventions will organise:

1. The Selecting of candidates to stand in the election from amongst the local community –  people who have proven their commitment and honesty and have a record of service.
2. The Convention should then work to ensure the election of these candidates.
3. Candidates of the People’s Convention undertake to Consult with and be Mandated by, their local constituency on the main points of legislation before Dáil Éireann, including budgetary matters. They also accept the principle of recall.
4. Elected candidates who fail in their duty are subject to Recall after a plebiscite of that constituency, an agreement to this effect will be signed by all candidates. 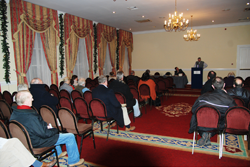 There was lively discussion during and after the meeting. Many signed up to build CPPC

Discussion at the meeting heard people describe how they were completely disillusioned with the existing parties and the undemocratic and disgraceful manner in which the country’s affairs have been administered.

A number of contributions highlighted the position of carers and the disabled, and the shambles in which the health services are left.

Also highlighted was the scandal of cutting back on the least well off in our society, the unemployed and low waged – while at the same time the bankers and bond holders were being paid off.

Another contribution from the floor pointed out that if the state took back control of the Corrib gas field, or renegotiated the terms, it could clear all of the sovereign debt.  There was a strong sense of outrage from the contributions at the meeting, a feeling of disenfranchisement and isolation from the political process and a demand for change.

Some at the meeting expressed doubt that the emphasis on democracy was not enough on its own, that policy should be formulated and announced to the people.  Another contribution felt that the CPPC plan was “utopian” and that human nature wouldn’t allow it.  All points of view aired were welcomed and contributed to the general understanding of everyone attending.

However, there was a majority feeling welcoming the initiative of CPPC and about half of the people signed after the meeting, while others took application forms and said that they would actively consider joining to help in the work.

The meeting concluded formally with many urging that we move towards organising the work of building CPPC, discussions carried on after the meeting ended.