The following three short articles are included on the flyer released today in Cork, to mark our National Day and to call on people to do something of significance to mark the day in a meaningful way, by standing up for ourselves! 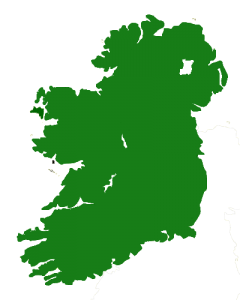 A .PDF of the A4 size flyer can be downloaded here.

This weekend, to celebrate our National Day, the ambition of our political ‘leaders’ is to be anywhere EXCEPT in Ireland.

The prize is to visit the White House or New York, but the capital city of any world power, or exotic destination, would do just as well.

This exodus every year reveals the psychology of those who rule over us, they have no love for Ireland and they have no faith in the Irish people.

Successive Governments believe that we must remain a dependent people, they see nothing else for us but the handing over of our vast resources to vested interests, mostly foreign.

They shed crocodile tears as our sons and daughters are forced to leave our shores once again, 500,000 of them since the onset of this latest crisis.

There is no plan to develop our economy to serve the people of Ireland. We continue to allow finance monopolies, foreign corporations, bondholders and market speculators to dictate terms – through policy imposed on behalf of the IMF and the ECB/European Union.

Domestic business is crippled, unemployment, emigration, mortgage foreclosures and terrible cuts in vital services are the order of the day. All this happens in order to pay debts which we have no responsibility for, but our own public representatives dictate to us that they must be paid.

Ireland is very rich. According to the IMF we are the 15th richest state on earth, the World Banks puts us at number 20 and the CIA says we are at number 21.

We are the world’s biggest exporter of beef. We export food every year to feed over 30 million people We have the biggest fishing grounds in Europe but our own fishermen are virtually excluded from them. We have huge resources in gas and oil, but we see no benefit at all from them. A glance at the vegetable counter in any supermarket will show you that most of it is imported, to green Ireland! Not long ago every town and village in Ireland had industry; manufacturing, creameries, tanning, textiles, food processing etc., it is virtually all gone.

It is no wonder when you look at the psychology of our ‘leaders’, they have no vision for Ireland. 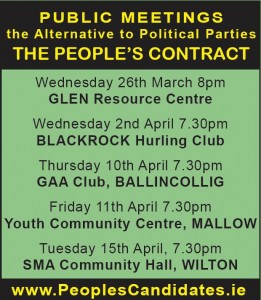 Why has no Government ever decided to celebrate our National Day in Ireland? Why have we never invited all the world leaders, the leading economic power blocks, to come to Ireland and celebrate with us? Which of them would refuse?

Irish people command huge international respect, we have built half of the biggest cities in the world, we top the league for generosity and charity to help others in need.

Such and celebration of Ireland, in Ireland, would focus us on ourselves, on our own national interests – but this concept is alien to those who have repeatedly sold us out.

It is time to set aside the vested interests and their Political Parties, they are ruling over us.

It is time to stand-up for IRELAND!
We, the people, must step forward…
Our time has come, it is NOW!

It is necessary that individuals take responsibility and stand up for our country, it is the right thing to do. Unless we, the people, step forward, separate to the Political Parties, we will continue to be ruled over and our democracy abused.

Ours is a great country, let’s mark our National Day by doing something for ourselves, there is a plan, join in!

There is a solution to the crisis in which we find ourselves.

It involves that the people should be consulted on the decisions that are made in our name, and that nobody be allowed to impose policy to benefit narrow vested interests.

The key factor for lasting national recovery is democracy, we must assert it, and THE PEOPLE’S CONTRACT provide us with the means to do that.

In Cork, there are 17 People’s Candidates so far, we hope that this number will double or triple before the closing date at the start of May. Each of these have committed to standing-up for IRELAND, for the people, without any pre-decided policy, without any ideologies or ‘ism’, just to assert our democracy.

If we elect even some of these People’s Candidates, and set aside the Political Parties, we will have made a start on the road to recovery. Cork has an opportunity to change the history of our country, by electing people who will actually represent our communities, as intended in the Constitution.

The People’s Candidates are different to all others because they have signed-up.

With THE PEOPLE’S CONTRACT our Constitution will be implemented for the first time ever, ensuring:

This is what Bunreacht na hÉireann requires in Article 28A, it says that Local Government shall “provide a forum for the democratic representation of local communities”. This does not mean that elected Council members should represent a Party or take instructions from any private club, it means that we, the people, must be represented.

If we implement THE PEOPLE’S CONTRACT then we will ensure democratic representation, this is the first step towards dealing with all the problems faced by our community. Adopting this approach will mean that we can put an end to the lies, the bullying and the dictate that have become common.

We call this approach “DEMOCRACY”, with it we can move on to tackle the problems throughout all of Ireland, rebuilding our communities.

The final short article on the flyer:

There should be NO OPPOSITION!

If each of our elected representatives did as required of them by our Constitution then we would have no opposition in either Dáil Éireann or on the Local Council.
Article 16.2.1 of Bunreacht na hÉireann states that:

“Dáil Éireann shall be composed of members who represent constituencies”.

So that is what they should do:

Local Government is defined in the same way, yet the Parties are represented, not the people. The Constitution also states that it is the right of the people to:

If our public representatives acted according to these provisions of the Constitution then they could not accept a Party ‘whip’, there could be no back-room deals, no secret arrangements – because every representative would be looking to represent their constituency.

By accepting ‘opposition’ status, or a ‘whip’; by not consulting the people, our representatives are not representing us as is their duty – let’s change that!