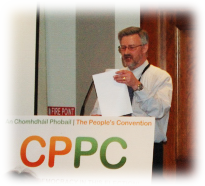 This is a very special gathering that has come together in the capital today.

For a couple of weeks now meetings have been taking place around the country. We have held two in Cork city and a further one in Cobh. In the next fortnight there will be three more in Kinsale, Bantry and Clonakilty. This Friday (21st Jan) we will hold a launch meeting in Wexford, in White’s Hotel.

We want to explain the basic idea of The People’s Convention.

Who initiated The Peoples Convention?

Let me introduce myself. I am Brendan Doris a 59 year old architect, living in Lucan, County Dublin.  I am coordinator of The People’s Convention. Diarmaid Ó Cadhla – from Cork – is national Spokesperson – and runs a small business software company.

We are for the most part professional and business people. Some of us have a common history in the student and democratic movement of the late 70’s, early 80’s.  When the present crisis unfolded – the fourth in my working life but by far the worst – we started discussing what could be done to address the situation and the fear and worry that was threatening to engulf so many people.  Since its initiation people from all walks of life have been joining this movement for democracy.

How should we respond to the crisis?

At the end of last year, before the IMF/EU bank bailout but with the promise of another savage budget in the offing we looked at all the proposals that were being mooted:

It was the last one that we looked at in particular. And we came to the conclusion that the situation did not require a new party as such. Well, not a new representative party.

This period of economic crisis has given rise to a political crisis. There is deep distrust of the Dáil political parties, especially of any which have ever formed a government in this country. In fact, the distrust runs much deeper.

Citizens feel that they are disenfranchised

The citizens feel that they are disenfranchised, that they have no say in how the State is run. Decisions are made in our name, supposedly ‘in the interests of the country’ for which we have never given a mandate. In short, there is a crisis of democracy – the lack of any in affairs of state!

The parliamentary system in Ireland is supposed to be a representative democracy, but it is neither representative nor democratic. The Dáil is today nothing more than a cabal of parties representing not the people but vested interest, who only differ in the detail of their devastating government programmes. They ensure that their own members fall into line through the system of party whips which on occasion means that they sometimes vote against their own conscience.

In the process these parties, and the ‘insiders’ they act for, have been enriching themselves at our expense. They have created nearly 1000 quangos if Shane Ross and Nick Webbs book The Wasters, is correct in which they have given allowances and directorships to the principles of the banking, regulatory, legal, real estate, trade unions and civil service sectors. In the process they have managed to consume millions in foreign travel of the most ostentatious character.

To add insult to injury they have set up tribunals of inquiry which for the most part have done little more than consume further tens of millions of the people’s taxes with only token prosecutions.

What type of reform do we need?

It is no surprise that very many people are raising the issue of reform. Even the charlatans who have brought the country to its knees through their clienteleism and corruption, are casting about looking to embrace the new mantra of ‘reform’. The Labour Party are proposing a list of 140 reforms no less.

This coming general election is turning out to be some sort of reform auction.

There are, of course, some well meaning people who see the problem of the total lack of democracy and are concerned at the palpable powerlessness of the citizen to direct the affairs of state. There are proposals for citizen’s forums, constitutional conventions, political reform conferences and many others. Individuals and groups and alliances are coming forward to stand in the election to offer themselves as reform candidates.

But, unless the essential issue of empowering the people before, during and after the election is addressed all these reforms taken together or separately will not be any value. That is not to say that there is no worth in doing state business or conducting our affairs differently on any particular question.

In the general elections in the past we have for the most part simply voted. We voted for parties who promised us that they would look after us. To prove how they could look after us we had ‘stroke’ politics. The local TD was able to ‘sort’ out pension or housing or health card or some other entitlement which had run into some bureaucratic cul-de-sac. This system worked whether or not a particular TD was in government or in opposition. And of course, you had ‘fixes’ for which there was no entitlement.

So until now we have been for the most part passive. But what if we, the electorate, act differently?  What if we do not wait for someone to save us, to create a new and wonderful party of political representatives that will not become corrupted?

The Irish constitution, Bunreacht na hÉireann, does not speak of political party representatives. It does not speak of political parties forming governments. It speaks of delegates to the Dáil, delegates from the constituencies, from the people in other words.  So, without any reform – for now at least – why do we not act in accordance with the constitution and elect delegates to Dáil Éireann, whom we have selected from honest people in our constituency who are prepared to serve for a period as a Teachta Dála – a delegate to the Dáil?

Why do we not put an end to the absurdity of electing groups of self serving careerists? How often have we been berated by the current crop of politicians about how hard their life is, the long hours and how difficult the career of a professional politician is? Being a people’s delegate to Dáil Éireann is neither a career nor a profession.

Yes, we are in a serious economic and political crisis. There are many other issues in the fields of child protection, education, health and welfare which urgently need to be addressed. But first and foremost we have to make the fundamental change in favour of the people and only we, the electorate can do that.

The main reform is that we ourselves should act differently.

If the people organise constituency by constituency on the basis of Selecting – Electing – Mandating and if necessary Recalling their delegates to Dáil Éireann then we will have made the one change, the one transformation, the only real reform that is called for now. The main reform is that we ourselves should act differently.  If we do, then we can bring about all the reforms that are needed by taking control of State affairs from first to last. Without empowering the citizens of this country there will be no fundamental change.

We can and must empower ourselves! The People’s Convention is just such an initiative to bring this about. It is an organisation of all citizens over 16 years of age in each constituency through which voters can exercise their prerogative not just to select candidates but to organise to get them elected, to mandate the TDs during the life of the Dáil and if necessary to recall them should it be necessary.

We must put an end to the reform Dutch auction, to the ‘smoke and mirrors’, to the confusing babble that is threatening to smother any attempt at clear thinking about what we the electorate must do in this General Election.

We have set about the building of a democratic movement which the people themselves control and through which they empower themselves. It is true that it will be party for the purpose of the electoral law on registration of party names so that CPPC – The People’s Convention can appear on every ballot paper in every constituency in which we can organise. But in all other respects we are not a party of the type that has existed until now.

The Peoples Convention is about enabling real democratic control by the people from first to last.

I want to finish now so that discussion can take place. But let us explain what we are working for going forward from tonight. We will now set up start-up meetings in any Dublin constituency in which we have so far aroused interest. These then will be assisted to organise more meetings in each area of the constituency to invite good people to come forward to serve as people’s delegates. Out of these meetings a final selection meeting will be held to select the constituency candidates.

CPPC candidates will contract to seek a mandate on the principles contained in all legislation and budgetary provisions from their constituents and to accept a vote of recall if passed at a referendum of the constituency.

Our policy is for the people to empower themselves by Selecting-Electing-Mandating-and Recalling if necessary their own Dáil delegates.