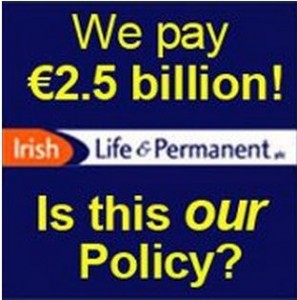 Our Democracy is usurped by Vested Interests and their Political Parties!

[a .PDF image of the flyer is available for download here]

It seems there is very litte sacred to Government, especially truth and justice. Some weeks ago Minister Rabbitte explained about lies… “isn’t that something you tend to do during an election”!

Minister Varadkar declared there would not be “a single cent for banks”, he said that “bondholders will be burnt”. More recently he explained that democracy was something “that needed to be managed”, he explained that we needed “a strong Party system and a strong whip system”.

During the Fiscal Compact debate Minister Coveney explained that we should “be wary enough about promises being made in the heat of an election”.

In an earlier referendum Ministers Alan Shatter and Brian Hayes arrogantly dismissed concerns raised by previous Attorney Generals. More recently the Supreme Court ruled that Government “acted wrongly” in the Children’s Referendum, it’s presentation was “not fair, equal or impartial” – yet it doesn’t mean anything!

Minister Gilmore’s famous sound-byte “Labour’s way or Frankfurt’s way” still rings in our ears, as do the promises not to cut Child Benefit or Carers Allowances – Enda’s 5 point plan is shredded, the 100,000 jobs never appeared, every week 1,500 are forced into Emigration, the domestic economy is ruined etc. etc.

This is not government according to the will of the people, it is not democracy. This is covering up, telling lies and yielding to foreign dictate by the IMF, the ECB and the banking monopolies of Europe. Our Government are overseers for the slave masters!

Only a handful of people decide anything in our country, they use the ‘whip’ to force it through the Oireachtas and then impose it on us citizens. None of our TD’s do their duty to “represent constituencies”, they follow Party or private policy, never seeking mandate from those whom they are supposed to represent.

Last year Bondholder payments from this country were just over €20 billion, this year we will pay out €17 billion more, this dwarfs any budget cutbacks, but no discussion!

Europe has not bailed out Ireland – we are bailing them out!

We have been forced to take on the debts of failed private banks. It works like this – the Troika gives us €67 billion, we give it to the zombie banks and they pay the Bondholders, a turnaround – we never actually get to spend even 1 cent of the money.

We have kept the Euro alive and paid the finance speculators (gamblers), but they say they are helping us … with friends like that who needs an enemy?