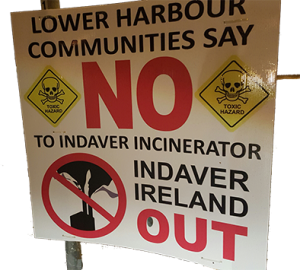 Article taken from Issue #4 of THE PEOPLE’S PAPER

A decision is due on 26 October from An Bord Pleanála on Indaver Ireland’s third effort to get planning to build a 240,000 tonne hazardous and non hazardous waste incinerator at Ringaskiddy, Co Cork
.
The application was lodged in January 2016 and a 17 day Oral Hearing held at Carrigaline Court last April.  A decision deadline was originally set for 12 July to meet statutory Strategic Infrastructure Application requirements, but was extended by An Bord Pleanála to grant themselves extra time to consider the application.

Invaders previous applications both met with the thumbs down from An Bord Pleanála’s Senior Inspectors following lengthy planning hearings.  The first application, granted by the Bord against the Inspectors recommendations, was challenged in the High Court by CHASE, and planning expired while a second application for a larger facility was being lodged.  This second application was refused in June 2011.

CHASE, the umbrella group campaigning against the repeated applications estimates that over €500,000 has been spent by the community fighting the applications.