STATEMENT from the LARGEST single grouping of non-Party
Candidates in the coming local elections.

Today, a total of 19 candidates in the local elections confirmed their signing of THE PEOPLE’S CONTRACT, they are from Cork, Monaghan, Limerick and Dublin.

All local election candidates have been invited to confirm their commitment to democracy, something which our Constitution requires of all public representatives, regardless of Party affiliation or none.

A stall was setup today outside Cork City Hall to facilitate candidates who wished to sign in public.  Disappointingly, so far, no Party candidates have accepted democracy… maintaining loyalty instead to their Party over the right of the community to be represented.

Spokesperson for The People’s Convention (CPPC), Diarmaid Ó Cadhla, stated that THE PEOPLE’S CONTRACT would effectively end the operation of any Party ‘whip’ and the traditional pact that operates in politics.  He said “use of the ‘whip’ means that our community is not represented, the Party leaders are, this is a denial of democracy”.

Ó Cadhla condemned the operation of the Party system, he said, “Political Parties have repeatedly stolen our mandate, they promise everything and once elected ignore the people completely, imposing policy and ruling over us.”

The People’s Convention highlights that there is no mention of the words ‘Political Party’, or provision for their representation, in our Constitution and calls them “no more than Private Member Clubs”, usurping the democratic right of the people to decide policy.

Ó Cadhla urges voters to grasp the opportunity next Friday to break the monopoly of the Parties, by electing People’s Candidates – they are all listed on www.PeoplesCandidates.ie. 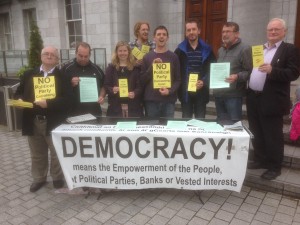